Pakistani education system has been faking it. For almost forty years now it has been pretending to impart knowledge and slapping degrees on those who survive it.

Since my friends label me as one with an elephant’s memory, let me narrate a couple of stories first.

In Queen Mary’s School in the eighth grade we experienced the first signs of the impending educational downfall when the school fell short of English teachers and we were introduced to Miss. X who said ‘law-fing’ instead of laughing and ‘drawma’ instead of drama. Then in the ninth grade we found ourselves being taught Pakistan studies by  Miss. Y, who had probably never heard the term coup d’état and therefore proceeded to pronounce it as ‘cope-de-at-at’.

Another memory is from Kinnaird College for Women. I recall listening in on a conversation about a certain girl ‘Z’ who it seemed, had shown interest in becoming a grade school teacher. Now Z, besides being a certified ‘fast girl’, lacked the studious diligence one would expect from someone aspiring to tutor younger kids. This is probably why one of my friends commented and I quote:

My friend’s judgmental opinion notwithstanding, ‘Z’ was hired by a popular school (chain) system and if not an early retiree, she should be working on our 4th generation right this very moment.

Fast forward two years, in the mandatory English language class at PUCAD (Punjab University College of Art & Design) we laughed in good humor listening to the professor read from a composition turned in by one of the students from Southern Punjab. The topic was simply ‘My first day in the Fine Arts Department’. The student wrote and I quote:

“I live in old hostel. Today morning I wake up and burshd my teeth… ”.

No it’s not a typo. The student did write ‘burshd’ instead of ‘brushed’ probably because  ‘brush’ is ‘bursh’ in Urdu and he got confused or because the teacher responsible for correcting him didn't know it herself just like Miss, X, Miss. Y and Z. How he managed to pass intermediate English in order to enter MFA (a course with an ‘English only’ reading list), was a mystery  but I wasn't going to hold it against him... not until six years later when he graduated and was hired by a Southern Punjab University, thereafter joining the ranks of X, Y & Z.

The last one kills me. In 2008 my sister told me about her six years old twins’ Urdu teacher who showed little Mehr-un-Nisa(مہرالنساء)  to write her name correctly and wrote Mehrooneesa (مہرونیسا).

“Our education system must provide quality education to our children and youth to enable them to realize their individual potential and contribute to development of society and nation, creating a sense of Pakistani nationhood, the concepts of tolerance, social justice, democracy, their regional and local culture and history based on the basic ideology enunciated in the Constitution of the Islamic Republic of Pakistan.”

But the 2010-2011 Education Statistics by Academy of Education, Planning and Management make the above pledge sound like a cruel joke. 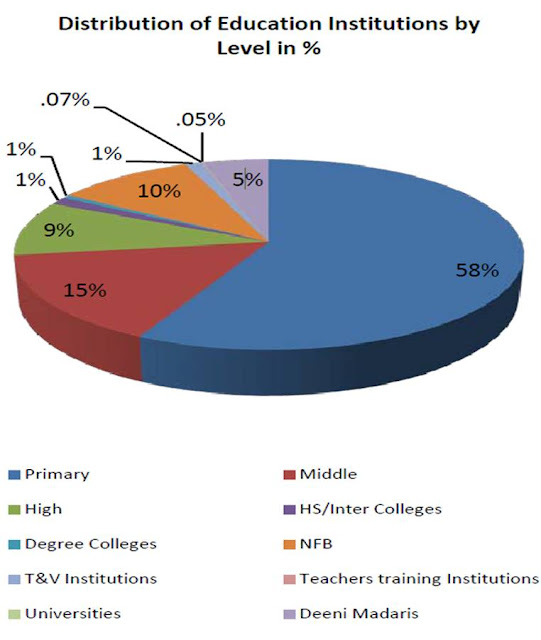 The report states that 58% of the total number of schools is of primary standard, 15% middle and only 9% are high schools. Inter and degree colleges are 1% each. The report also states that 28% of the available schools in Pakistan are private but they employ more than 42% of the total number of teachers thus creating a huge imbalance in distribution of qualified personnel in the education sector. Moreover these private schools are concentrated in urban areas of the country and enjoy a 64% share in the urban school business. They claim 54% enrollment and employ 64% of the total number of urban teachers. But when it comes to the economically less privileged rural areas the private sector contributes only 16% of the schools and caters for less than 20% of the students living there.

There are more appalling statistics available online through various reports, the worst for me being that of the total enrolled, less than 60% make it to the fifth grade.

In the given scenario we might still want to penalize Jamshed Dasti, Shumaila Rana, Sheikh Waqas Akram and the other 103 accused members of the parliament for ‘lying’ about how they acquired their 'educational certification' but what’s the point? In a country where education is not a right but a commodity, where its quality changes with the price and location and where we have been inducting Xs Ys and Zs in the tutorial staff for the past thirty years isn't the nature of most degrees essentially ‘fake’? Or in Aslam Raisani’s words: "a degree is a degree! Whether fake or genuine, it's a degree! It makes no difference!"