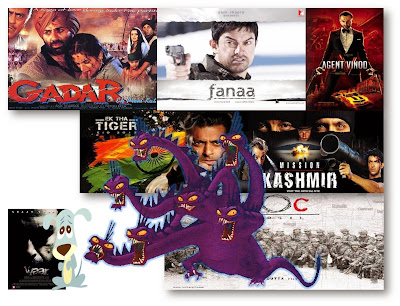 I absolutely adore my Indian friends! I can die for Srini & Manju Anumolu, would cease to exist without Vivek Agnihotri and Nanditta Banerji andwouldn’t recognize myself if SriRam Velaga, his children and Am’ma’ma were taken out of the equation.

But the above are very personal peeves and cannot be compared with moments which pop up because of disinformation, disinterest and disregard for simple things like historical facts and objective reality. For example when a singer pronounces the word ‘ajdaad’ (اجداد पूर्वजों) as ‘azdaad’ switching the j sound with the z sound, I cringe for two reasons:

Then there are situations when I come across Indians at shop registers and parties and they say, “Indian Pakistani, same thing”; I wonder what part of sixty six years of separation did they miss? Which brings me to my latest … well… WTF moment.

WAAR (وار / strike) was released on 16th October, 2013. Since then the media is abuzz with opinions, critiques and predictive remifications. Looking at the news coverage one finds the words ‘predictable, propaganda, patriotism, being used repeatedly to define the movie, making ‘controversial’ the second most used word.

It is baffling to see a Pakistani film receive so much (international) media attention. Continuous coverage by the Wall Street Journal, The HuffingtonPost, Reuters, Euro News etc. is both interesting and surprising to say the least.
Surprising, because unlike India, ‘film’ is not a recognized industry in Pakistan. While Indian cinema flourishes under the umbrella of Ministry of Informaion and Broadcast, being mothered by NFDC & Film Division, Pakistani cinema has gone through rapid degeneration and has been comatose for almost forty years now. Its utility in terms of determining cultural identity or projecting national sentiment is as obsolete as the 8/8 camera. The proof lies in the number of films produced every year, the archaic technical knowhow and the abysmal acting talent, not to mention the content which is, almost always, absent. Compared to that, Indian films have a lareger-than-life influence on Indian society. For a country that produces more films than any other in the world, cinema is a powerful determinant of cultural identity. WAAR arguably, has raised the standards of film production in Pakistan but that doesn’t seem to be what everyone is paying attention to.

Interestingly, attention is focused on the content of the film, most particularly the part which is “anti-India”. Why I find it interesting is because this approach is neither new nor unique to films in general and Indian films in particular; then why do this particular production receives so much reaction about the subject matter? Twenty four years after the fall of USSR, Hollywood still cannot get over its pre-iron curtain mindset and continues creating villains with thick Russian accents and names ending in ov. Similarly, just in the past twelve years Bollywood has released ‘Mission Kashmir, Gadar, LOC, Fanaa, Agent Vinod and Aik tha Tiger, besides other, less popular titles. That alone gives an average of at least one anti-Pakistan film every two years. So what’s the big deal if, after a few decades, an ‘anti-India’ film comes out of Pakistan? 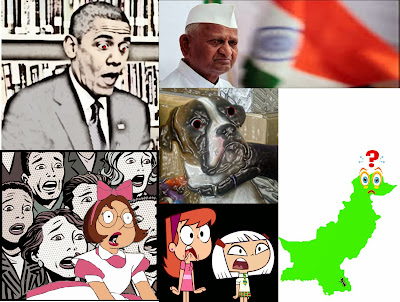 I have looked high and low for similar media concern for the above mentioned six movies but have found nothing. I have also fished for analysis/reviews about WAAR focusing on cinematography, screenplay, acting and musical score but came out dry… So I am like,

Posted by Saleha Minto at 1:57 AM No comments: