Worth vs Value in Putting a Price Tag on Housework


United Nations Statistics and Indicators on Men & Women suggest that:
According to a 2011 survey by the Professional and Domestic Services Institute, in the US a live in housekeeper can expect an annual package offering $35,000 to $60,000 of take home salary for a 50 hour week with weekly and annual holidays and benefits including automobiles and insurances. The high profile website, which caters for all who can pay/afford, offers $85,000 to $150,000 a year to individuals qualifying to work as 'Administrative Household Managers'. The job requires a college degree and responsibilities include guaranteed smooth running of everyday life at the employing household including procedures, schedules, rules, itineraries, events, vacations, travel etc. Administrative Household Managers are expected to budget, manage and execute short notices and tall orders. An overview suggests that these individuals are expected to deliver almost everything that a middle class housewife is expected to do; which compels me to share two most thought provoking facts with you: 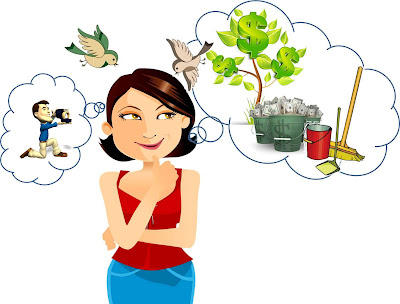 The above facts are neither hard to find nor hard to believe. What's hard to believe is that they have never been used in determining the value of the most common job in the world, only because most of the times it is being performed without compensation by the woman in a domestic relationship. In a world where everything (including labor) is price-tagged according to its profitability it is strange that those which are for free are the most unappreciated. Yes we have come a long way from wheat grinding stones and wood burning stoves; and yes, like the rest of the world, housework continues to enjoy a regular influx of efficiency tools but the fact remains that in a domestic unit the one responsible for housework is the most un(der)appreciated.

There is also another sad fact. Housework, is devalued and somewhat not accepted as a skill not only by those who enjoy it for free but also by those who perform it.

For example there is my mother, who chose to put her own paying career as a college teacher and writer on hold to take care of her house and kids until the kids were on their feet and things requiring personal attention became fewer and far apart. However, she never fails to remind me that I need to get busy with a 'job' because I have been  'free' for too long. During such reminders she tends to project that things like putting one's culinary skills to work, delivering fresh laundry to all family members, daily cleaning and upkeep, grocery shopping and  regular event planning, management and execution etc. do not qualify as a 'job'. I want to forgive her though, for the reason that she belongs to a culture where immense social disparity allows for cheap, unskilled domestic labor, which leads people to believe that the jobs of housekeeping, nannying, cleaning and cooking are as menial and undemanding as the persons doing them. But that is not an excuse, because she also knows that without her continuous supervision her unskilled staff cannot perform. Which only means that for any job to run smoothly you either require skilled labor or a well trained manager. 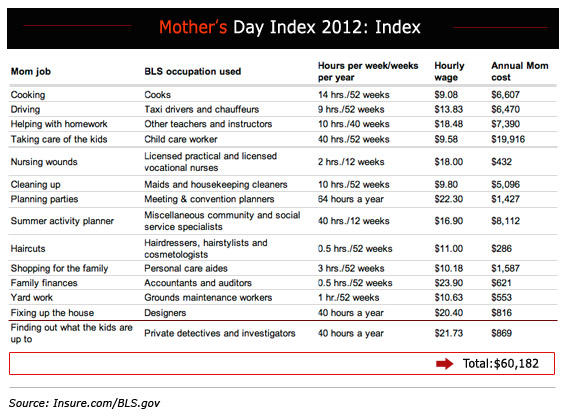 The importance of the size of a price tag is more sorely evident in a capitalist society like ours where housekeeping does not come cheap but still housework is not valued accordingly when it is being done by the wife.

Listen to this story. Last Monday, at 2:15 in the afternoon, a knock at the door most annoyingly pulled me away from my painting. A well dressed man with a very friendly smile stood on the porch. Misinterpreting my annoyance as fear he said "Did I scare you? I'm sorry, I didn't mean to." For some reason, instead of saying that 'I was in the middle of painting a six foot canvas with acrylics and since they dry very fast, therefore the expression', I said "I have something on the stove; I'm concerned that it might burn". Obviously my response failed to  convey my urgency to get back to work because he gave a chuckle and proceeded to introduce himself. "I am Mr. X, the neighborhood financial consultant. They call me the finance doctor and I represent this very big Investment company with seven million clients" he offered me a colorful flyer. I wanted to say 'which part of something on the stove did you not understand', but instead, I smiled politely and took the flyer. Long story short he talked for a good ten minutes probing about our finances and offering his services; and then abruptly asked "how is that I caught you home at this hour today"?
"I don't work for money; if that is what you are asking" was my response.
"Oh, so you are a stay at home mom... you don't work... you take care of the kids".
The sheer oxymoronity (excuse the contrivance) of his sentence left me speechless for a few seconds. "I...take care of the kids too" I managed to reply... and that was that.

One would like to think that of all people a financial consultant would understand the financial advantage of distribution of work between two partners, to the best ability of each in any given situation; but obviously this one could not even identify 'work' or 'job' in the absence of a price tag.

The greater disappointment, however, is when similar reactions come from people like my brother. A marxist by thought, i expect him to be able to gauge worth and value through a dialectical process.  He might not denounce housework unequivocally but he does depict it as prosaic and devoid of providing intellectual stimulation or gratification.

Each household is different from the other. In most middle or upper(ish) middle class homes, where generating a second income is not a matter of survival, housewifing instead of housekeeping  is evidently more commonplace. For example, in our case my husband and I have divided responsibilities on the basis of our personal strengths and weaknesses. The concept is 'socialistic' where use-value of our abilities is as much importance as their exchange-value. My husband is a trained marketing professional and his greatest strength is his ability to keep pace with the ceaseless evolution of his profession and to adapt effortlessly and seamlessly. He, in other words, is single minded and works extremely well with fixed targets. I am a trained creative artist and my greatest strength is my flexibility to be innovative on demand, with finesse, without losing structure, order and eventual productivity. I, in other words, can take on multiple jobs of various sizes and character, from beginning, middle or the end and make them delivery ready, without fuss and confusion. Simply put, I provide my husband with a strong, comfortable and effective launching pad to soar as high as he does. The integrally interdependent nature of our jobs renders individual success irrelevant since, within the family unit, none can perform without the other. It is basically a collaborative division of work on two equal but different levels. Why one level is deemed higher than the other is the doing of a society which has lost the understanding of use value vs exchange value.

If you Google 'wind turbines' you will see hefty price tags ranging from three to five digits depending on the size and efficacy of the turbine, but from the cheapest to the most expensive, a wind turbine is useless without wind! In my opinion, there cannot be a better example to demonstrate how use value is almost always taken for granted by materially trained human minds.

It surely is a tragedy that idioms like 'time is money' have become hardline truths in our world of profit and private ownership. The folly of this behavior/attitude reflects in the way human race has abused its environment, by plundering, wasting and not valuing expendable resources essential for long term survival. Therefore, no matter how ignored or overlooked, the axiom of value of housework undeniably stays put even in absentia.

Posted by Saleha Minto at 9:54 PM No comments: