The myth of equal opportunity 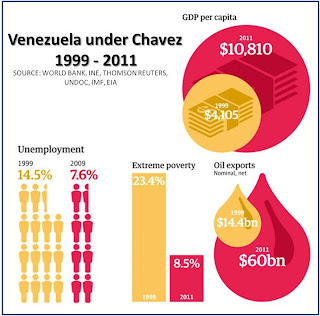 Hugo Chavez passed away yesterday.
Since the year 2000 his socialist government was focused on achieving the UN adopted Millennium Development Goals. Statistics confirm that Venezuela under Chavez showed consistent improvement towards each goal and was predictably set to achieve its targets for the first deadline of 2015.

On the evening of the 2002 Venezuelan Coup d’état attempt I was sitting with some people at TGI Fridays near Valco Mall in Cupertino. It was the time when Silicon Valley’s ‘.com’ bubble had already sprung many leaks. Amongst those present at our table was a young Indian entrepreneur, founder member of a startup, struggling for the next round of funding; hence not in a good mood. So when the discussion drifted from Venezuela to socialism I made the mistake of opining how Pakistan and India could use the socialist model to combat poverty. The young Indian entrepreneur did not receive this well.

I am not sure if it was the ‘socialist’ suggestion itself which made him visibly upset (since at that time CPI (M) was still strong in West Bengal) or my reference to ‘poverty, Pakistan and India’ in the same sentence. Whatever the reason/s the young man wasted no time in declaring me incompetent of making such a comment and proceeded to bullet spray me with numbers (mostly percentages) ‘meant to depict’ the good future and fortune of the Indian common man. The few I remember were:

‘India offers everything, malls, clubs, nightlife’ … probably correct.
‘Everyone has access to a car, a computer and a cell phone’ … not correct.

I was surprised (read ‘frustrated’) to see how easily the word ‘access’ is confused with the word ‘available’ specially at the hands of one who is in the business of convincing Hedge Funds about the viability of his product.

This is what the dictionary says:
a·vail·a·ble
Adjective
Suitable or ready for use; of use or service; at hand.

ac·cess
Noun
The ability, right, or permission to approach, enter, speak with, or use.

A few examples could be:


And dare I say that at that time in TGF Fridays


In other words availability does not guarantee access. Access requires a just and useful distribution of means which would eventually ensure that opportunities are availed on equal grounds.

Here in the US we make the same confused mistake while defining ‘Equal Opportunity’. We like to be called the champions of equal rights but shirk and scream ‘bloody socialist’ when asked to create the financial equilibrium much needed to determine equality of any kind. Obviously in our culture ‘granting’ equal rights does not take priority over personal property, income and inheritance. Sadly in this case, the individual, not the society, takes preference. 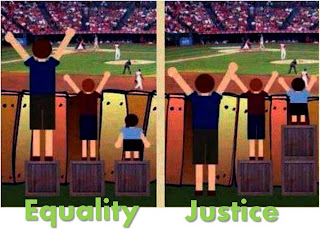 The idea of equality and Equal Opportunity might be very appealing to most people but its details and mechanics often put the same people in a double bind. Where Chavez’s socialistic ways brought a nation together, there were those few who fled the country in disagreement. While Venezuela mourns for the one who helped it come out of poverty and stand on its own two feet by putting domestic progress first, Venezuelan expats in Florida cheered his death over beers.

Allow me to say this:
Through creation of societies and social institutions humans have been able to march on broader avenues towards bigger goals. ‘Celebrating’ the death of a human defeats the purpose of being civilized. It is very similar to a child rejoicing the death of a parent who expected him/her to support weaker siblings so they could also become strong. To achieve that purpose the parent enforced rules against hogging resources and privileges with which the child disagreed and ran away.