The Matter of Ahmedinejad and Elena Frías de Chávez 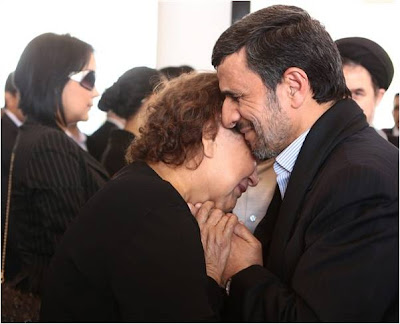 The ‘term’ to understand here is ‘na-mahrem’ or ‘ghair-mahrem’.  ‘Mahrem’ or ‘Mahram’ from Arabic means ‘forbidden’ or ‘prohibited’. Prefix it with ‘na’ from Farsi or ‘ghair’ from Arabic (both meaning 'not') and it should becomes the opposite. But, interestingly, in this case only, instead of changing the prefix enhances and somewhat seals the meaning of the word. A 'na-mehram' therefore is essentially the 'most forbidden'.
Na-mehram is not a word used for just anything. In fact, the term was created as legal terminology for Islamic sharia to interpret the difference between marriage and incest.

And for the women it says:
Al Quran (4:23) An-Nisa
And tell the believing women to reduce [some] of their vision and guard their private parts and not expose their adornment except that which [necessarily] appears thereof and to wrap [a portion of] their headcovers over their chests and not expose their adornment except to their husbands, their fathers, their husbands' fathers, their sons, their husbands' sons, their brothers, their brothers' sons, their sisters' sons, their women, that which their right hands possess, or those male attendants having no physical desire, or children who are not yet aware of the private aspects of women. And let them not stamp their feet to make known what they conceal of their adornment. And turn to Allah in repentance, all of you, O believers, that you might succeed.
Al Quran (24:31) An Nur

Where the above examples are not the only in Quran addressing ‘mahrem’ or ‘na-mahrem’; the holy scripture is certainly much less definite about gender based social segregation. And as the above examples show how important it is to maintain the prescribed male female interaction protocol, one wonders why Allah would not instruct about non-sexual physical contact unless it were simply unnecessary.
However, Islamic sharia does not rely on Quran only. It borrows equally (if not more) from the 'Ahadith' (sayings of and about the prophet narrated by followers) to give 'Sunnah' (prophet's practices) a proper place in the Sharia. The most interesting (read 'thought provoking') fact about Ahadith is that the process of their authentication, compilation and documentation did not begin until almost two centuries after the prophet's passing. for someone like me, this fact alone creates issues with the authority of this 'source'.

I usually do not go by Ahadith owing to controversies attached to various narrators and authenticity thereof, but since sharia law is defined as a composition of Quran and Ahadith, here are some on shaking hands with a ‘na-mahrem’.

"It is better for one of you to be pierced by an iron needle in the head than to touch the hand of a woman that is not allowed to him." (Tabarani)

Aisha, said, "No by Allah, the Prophet's hand never touched a woman's hand, he used to accept their pledge of allegiance by [hearing their] words only." (Muslim)

Islamic sharia proceeds to further exact boundaries as in the chart below, most of which are not to be found in the Quran: 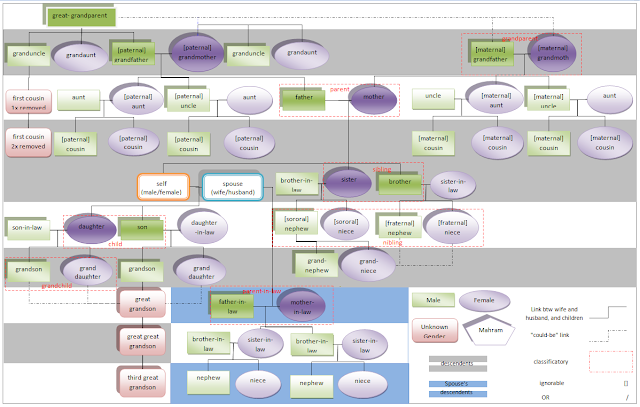 As far as the Quran goes, there isn't any confusion regarding gender differentiation, discrimination, and lopsided hierarchical power between Muslim men and women.

Not to mention the convenience that men have in divorcing, independent travel and the exclusive honor of leading the prayers. Last one so much so that even a mother has to stand behind instead of next to her son in a prayer congregation.

Surprisingly there is nothing which would prevent compassionate hugging and sympathetic hand patting.

So coming back to the questions above and the hoopla thereof, I want to humbly suggest that other than wisdom, there is much pleasure in reading and learning. Especially about what we let constitute our lives and what we follow blindly. Not only does it prevent one from hitting at will sometimes it brings absolute vindication.

Ahmedinnejad doesn't have much to lose here. His term ends in August 2013 and that will be that. As for those who want to slap him for his bad behavior, the Quran says:

As ambiguous as these lines are, I would want to conclude that judging muslims should sometimes leave judgement to the divine  omnipotent, omnipresent and omniscient being.
Posted by Saleha Minto at 3:01 PM