I am not an extremist; only a reader of history and an analyst of facts. 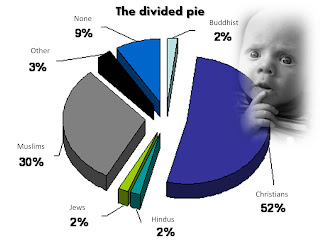 In friendly discussions there is a consensus on WHAT we need for a better world:
Suggestions for HOW to achieve that include:

Here is the issue with providing education, understanding and the ability to synchronize to those who believe in religious scripture being ‘word of Allah/God’.

Whereas recognition of the inherent dignity and of the equal and inalienable rights of all members of the human family is the foundation of freedom, justice and peace in the world,

So it’s not surprising that Saudi Arabia, Iran and other Islamic states refused to sign this UN document because the document they live by (ie. Quran) tells them the following:

Men are in charge of women by [right of] what Allah has given one over the other and what they spend [for maintenance] from their wealth. So righteous women are devoutly obedient, guarding in [the husband's] absence what Allah would have them guard. But those [wives] from whom you fear arrogance - [first] advise them; [then if  they persist], forsake them in bed; and [finally], strike them. (An Nisa 4:34)

When article 19 of the same UN document states:

Everyone has the right to freedom of opinion and expression; this right includes freedom to hold opinions without interference and to seek, receive and impart information and ideas through any media and regardless of frontiers.

But the religious document says:

And [it is] an announcement from Allah and His Messenger to the people on the day of the greater pilgrimage that Allah is disassociated from the disbelievers, and [so is] His Messenger. So if you repent, that is best for you; but if you turn away - then know that you will not cause failure to Allah . And give tidings to those who disbelieve of a painful punishment. (At Tawbah 9:3)

Why is it that India, though being a signatory to the UNDHR has not been able to rectify the internal problems of cast and religious bias which costs it a multitude of riots, raids and subsequent deaths year after year for more than half a century?

Furthermore, is it not clear that each and every religion discriminates between men and women in matters of social standing, equal opportunity and right to wealth?

... women should be silent in the churches. For they are not permitted to speak, but should be subordinate, as the law also says. If there is anything they desire to know, let them ask their husbands at home. For it is shameful for a woman to speak in church. (NRSV, 1 Corinthians 14:33-35)

Allah instructs you concerning your children: for the male, what is equal to the share of two females. But if there are [only] daughters, two or more, for them is two thirds of one's estate. And if there is only one, for her is half. (An Nisa 4:11)

Bible reserves the inheritance for sons even if the daughters are present and double for the first born son while Quran establishes using immaculate fractions that the most part of wealth should rest with men.

Even the most flexible of all The Buddha said:

it is impossible that a woman should be "the perfectly rightfully Enlightened One'", "the Universal Monarch", "the King of Gods", "the King of Death" or "Brahmaa' Majjhima Nikaya III III. 2. 5. Bahudhaatukasutta.m-(115) The Discourse on Many Elements

More over every religion has an inbuilt concept of being ‘the best’. A narcissistic behavior of finding fault with everyone and everything but self.

And when the sacred months have passed, then kill the polytheists wherever you find them and capture them and besiege them and sit in wait for them at every place of ambush. (At Tawbah 9:5)

And the Bible says:

The above is just a peek into what role religion plays in resisting education on a human level. Religion creates boundaries above and beyond geography and genetics. People fight over proving who’s religion is better, not because the ‘extremists’ gave them this idea BUT because their holy books say so and their prophets declared so.

Let me also say here that one cannot ignore these issues by advising people to focus on what is currently relevant to our societies. Yes religions do offer insight and structure to many social ideas but the mere fact that they also contain major contradictions within their messages turns them into prime reason for issues relating to universal social cohesion.

If the Muslims believe that they follow the only true and the most superior religion its not because an extremist or a politician with undisclosed vested interest told them that… it is written in Quran.

If the Hindus shun their fellow men as filthy and unworthy of socialization its not because they were told that by a crooked clergyman, but because its written in the Geeta.

If Beit Din does not allow women to testify it’s not because the Rabbis have ganged up but because its written in the Torah.

How are we going to teach Acceptance, Respect & Peace in the presence of religious scripture that contradicts itself?