Someone should tell Imran Khan to Stop!

And I don’t mean the ‘dharna’.

Ignoring the facts that:

Still, I’m afraid, he does have a ‘democratic right to protest’ against King Nawaz Sharif.  Every adverse outcome can therefore be listed under ‘collateral damage’.

But someone should tell Imran Khan to stop!

·         From referring to himself as ‘kaptan’: Someone should tell him that PTI is not a sports team of 14 carefully selected cricketers who excel at the game. It cannot and does not work as cohesively and can and did show rifts and tears as soon as two weeks into the now one month old ‘dharna’.

·         From mentioning how he created Shaukat Khanum Memorial Hospital: Someone should tell him that Pakistan is a country, not a cancer hospital and countries cannot be created (or recreated) through fundraising because you wish & want to honor the memory of a dear departed and people think it is a noble cause.

·         From reading out accusatory data of property prices and unpaid tax numbers against politicians who do not belong to PTI: because it’s extremely easy to find similar rats within PTI; in fact, when on top of his container, Mr. Khan is very often winged by such vermin.

And most importantly,
·         Someone should tell Imran Khan to stop bragging about 28% of KPK budget being earmarked for education for two reasons:

1.  Pakistani public schools do not ‘educate’ students; they barely make them ‘literate’.
2.  We live in a system where successes and failures are determined by ‘inheritance’ NOT ‘literacy’.

I am not convinced that Mr. Khan understands how exactly inheritance works when he is denouncing hereditary trends among politicians, within governments and within political parties.

Inheritance is not rocket science. It is a material concept and the most unjust means of transfer of wealth and power in the world integrally linked to class stratification. Let’s just explain it here using Imran Khan’s assets declaration below. 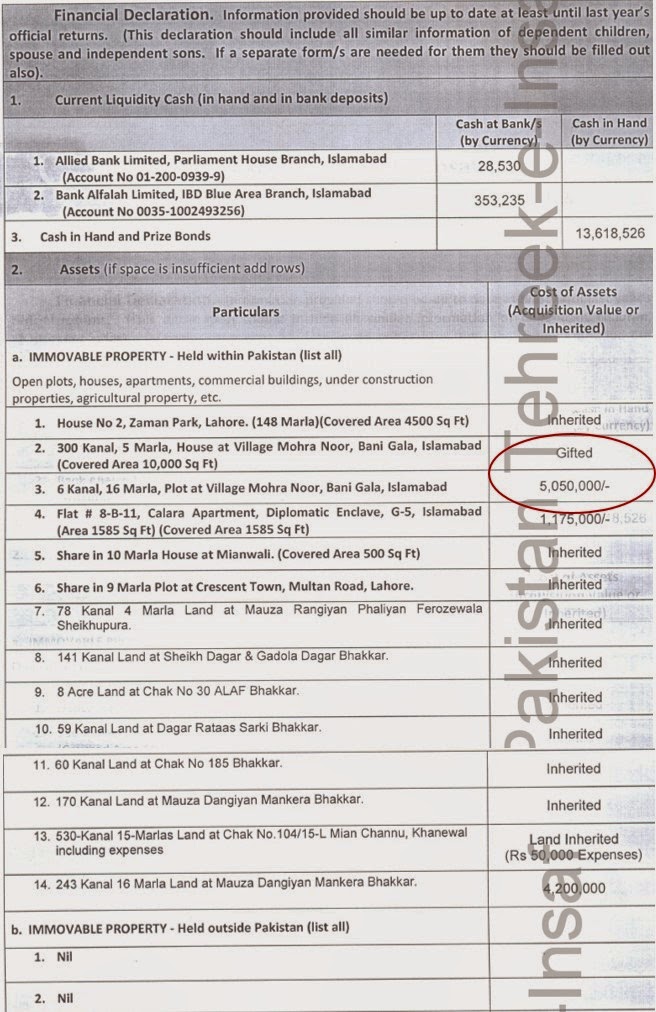 Take for example, the two assets circled in red. Going by the price of the 6.8 kanal plot which Mr. Khan bought himself for Rs.5.05 million (50 lakh 50 thousand), it is easy to calculate the value of the ‘gifted’ property of 300 kanals to Rs.222 million (22 carore); and that is while ignoring the additional value of 10,000 square feet of, assumingly, excellent construction. This calculation alone adds almost Rs.217 million to the measly amount of Rs.6.225 million displayed above.

This and the rest with it, is the wealth which will be transferred to Imran Khan’s children. Whether they are educated or illiterate, talented or stupid, play cricket or poker! Whether they live in Bani Gala or Turks and Caicos, marry Muslims or Buddhists, become politicians or acrobats; this wealth rightfully belongs to them or so says inheritance. Exactly the same way 2,538 acres of Bhutto estate and the 50+ properties on Asif Zardari’s assets declaration rightfully belong to Bilawal, Asifa & Bakhtawar and Ittefaq Industries, foundries, Jati Umra estate and other similar stuff rightfully belongs to Hassan, Hussain, Maryam, Asma, Hamza and all. The difference in size of these ‘lists’ of inherited & to be inherited assets does not change the fact that these people own wealth which they did not work for, did not pay for, but which hugely contributes towards making them rich in a way that offsets the economic balance within a society.

Sometimes it takes one generation and sometimes a few more but inheritance has always proved to be the most determined and determining factor in accumulation of wealth. It is also the strongest non-market practice perpetuating capitalism.

Imran Khan’s updated assets disclosure on PTI website lists fourteen ‘immovable assets’ out of which ten are inherited and/or gifted. This means that more than 70% of his immovable property just dropped in his lap. He is young and looking to marry so there is every chance that this list gets at least doubled by the time it drops in the laps of his children.
The dozen ‘homes’ owned by Jehangir Tareen will probably become two dozen; Asif Zardari will probably sell the palace in Surrey to buy Versailles and Nawaz Sharif might just turn the entire banks of BRB into lawns for Jati Umra residents..... because there is no frikin way that any percentage of any budget OR any subsidy in any sector could change the course of inheritance and the accumulation of wealth thereof. Be it the oldies like Bhutto Zardari & Sharifs or newbies like Tareen (well basically Pir Pagara clan) or be it the non-politicians like Manshas and Malik Riazs, the networths will increase with each passing generation and the inheritance pinatas will will keep getting larger and larger.

I have trouble deciding whether Mr. Khan is ‘absurd’ or ‘appalling’ when he brags about subsidizing ‘atta, chawal and ghee’ for the ‘poor’ of KPK. The fact is that the poor are poor because the rich are rich. Now either Imran Khan does not understand this simple equation; which makes him absurdly idiotic OR he understands it very well; which makes him appallingly two faced.

So therefore, someone should just tell Imran Khan to stop.
Posted by Saleha Minto at 6:02 PM