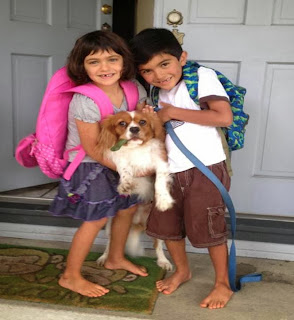 The math of gains and losses of life is not as simple and straightforward as the times tables which we remember by heart and recite by rote. Two times two isn't four when the values are measured in feelings instead of size, weight or amount. It all depends upon perspective; where one stands and what is and is not in the line of sight. For me, the sum total of 2013 is in a question that five years old Leah Shanti Velaga asked her teacher on receiving the prize for 'most caring person in class'... after receiving the prize, Leah went up to her teacher and inquired,


"when are you going to give a prize to my brother"?

Being someone who likes pancakes for all meals, dislikes leaving canine sibling 'Jake' back in California, when the family goes to celebrate Christmas with grandparents in Pennsylvania, and being accustomed to seeing brother Aani at par in everything that happens, I am not sure if Leah understands the significance of her win or the question which followed. To me, however the significance is tangible... to the extent of being 'in your face'. Through the fifty years of my existence I have come across many who were born with the blessed personality trait of being 'caring' but grew out of it by the time they were adults. Somehow, growing up made these people lose the human ability to 'care'; an act that requires going past personal gains and vested interest in order to bridge the disparity gap.

Grammatically the difference between 'being caring' and 'to care' is simply that of a noun and a verb; one is fixed by definition while the other explains an action. Add an analytic perspective and one finds that the noun and the verb are not mutually inclusive; in fact, in all philosophic complexity it would appear that
'to be caring -as in the noun- does not denote the act of caring itself'. A similar example is that of 'knowledge & understanding' where the presence of knowledge does not guarantee the presence of an understanding to apply it.

As I said, Leah is five and perhaps clueless about how important 'active caring' is in today's world. I would assume that for her 'to care' is more instinctive than sentient, and her eagerness to include her brother to the list of prize winners is an extension of the same instinct. That is why I have no idea how she would have reacted if the teacher had told her,


"Leah, our resources allow us only one prize so if you want your brother to have one too then it is best that you share".

Probably she would have shared, because in this country sharing is taught  at the grass-root level, to the kids as young as two and three who come together at day care centers and playgroups... so much so that if a child brings a toy/ book from home, but is unwilling to share, the caregivers/teachers do not allow taking it out in order to avoid comparison, competitiveness, ownership arguments, superiority issues, control factors, choice discrimination and other problems not conducive to a thriving social set up. How and why is it then, that individuals introduced to such concepts at the very beginning of their lives grow up to call it 'socialism' as if the word was an expletive?  How and why do they not feel an iota of responsibility towards forgetting and foregoing a lesson which was poured into their foundation? And above all, how and why is it that factors like comparison, competition, superiority, ownership and control are unacceptable reasons for conflict in a small classroom but assumed normal in the global social order?

If we cannot answer the hows and whys listed above then we must try to answers the whats. For example, what is the purpose of consistently teaching our kids something which the society vilifies and rejects as a principle for broader human life? What is the logic behind nurturing a certain behavioral aspect in young humans when their adult life will be spent negating its practice and criticizing its suggestions? Caring is an emotionally triggered response with the purpose  to compensate for what lacks in a situation be it material or immaterial, worldly or spiritual, intellectual or simple; in other words, caring is an attempt to create balance through equality by redistributing mood, material, skill or temperament; what is the reason behind encouraging and rewarding our children for demonstrating such an idea of mutual equality when ultimately they will be living in a world of cut throat competition for material gains where 'big fish eat small fish' all the time?


Every year, in exchange for huge tax deductibles, the world elite donates massive amounts of money to programs, efforts and maneuvers dedicated to investigating, uncovering and documenting the existence and the reasons for the existence of socioeconomic disparity in the world.

Every year data is refreshed and updated either about no food in Congo, or no water in Somalia, or no jobs in Djibouti, or 303 doctors for the entire population of Malawi or no schools for more than 1/4th of the entire school age children population of the world.

The World Organizations, the Jolies and  the Top Givers are not unaware of the global socioeconomic imbalance and its reasons are not lost on them. "I am rich because they are poor" is an omnipresent reality of their lives which never stops staring from all directions but fails to receive a reaction even a wee bit similar to Leah's.

Is it because Leah is only five and has yet to be influenced by the idea of private ownership and free market? Or is it because she has not yet turned cannibalistic by considering herself the proverbial 'big fish'? Could it be that she does not find being human a burdensome responsibility and would rather share and play than own, accumulate and sit on it?  Or is it that the 'middle man' has yet to discover the potential for financial gains in Leah's activities? Whatever the reasons, I am grateful that this five years old decided to ask that question when she did, because without it, I might not have had any values to add up and find the sum total... not just of 2013 but of the entire two thousand and thirteen years of the Georgian Calendar.
Posted by Saleha Minto at 4:19 AM