My aunt, my mother’s older sister (may her soul rest in peace) was fond of medicines. For self medication she had a thing for Abbott’s ‘Erythrocin’.  Be it sniffles, scratchy throat, fever, cough or a full blown cold; she would recommend the shocking pink pill. So much so that in 1987, when my sister chose her wedding outfit, she explained the color to everyone as ‘Erythrocin pink’.  But even my simple, old fashioned aunt
knew the limitations of the drug and when one of us complained of stomach ache or the runs, she knew that Buscopan and Imodium was a wiser choice.  Being a simple housewife from the 60s through the 80s even she knew that medicines have a spectrum.

How is it then that the educated and the youth of Pakistan cannot differentiate among the dynamics of being a national leader, a sports team leader & a premium stake holder in a corporation? 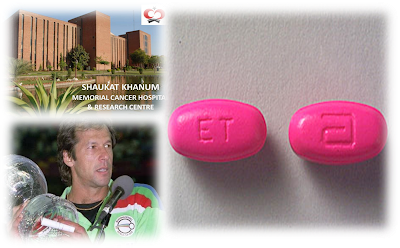 In my opinion, leading a team to victory is absolutely different from leading a nation to success. The former is simple. The best at the game are chosen to form a team to win so everyone makes money. In the later, choosing the best for the nation means nobody but the nation makes money … which cannot be the preferred solution in Pakistan’s case.

In the former, if you are the best at the game and can make the team win, everyone wants you and you have leverage. So if at any time, things do not go your way, you can threaten to leave and that can force people to see your point and comply. However, in the later, you do NOT have leverage unless your diplomacy skills are ABSOLUTELY EXCELLENT and you have the talent to appease the opposition as well as the allies. If such traits are absent then at any time you threaten to leave (because things are not working as you’d like them to) the vested interest might very well shake your hand and say ‘good bye, it was nice while it lasted’.

In a sports team you try to choose the best players even if they do not see eye to eye with you on political matters. They know the game, they are good at it and they can win it for you. In national leadership, you have no choice but to see eye to eye on issues with those who have followed you.

Here’s what I have to say.
Imran Khan for cricket, GREAT! Strong player, stronger captain, no diplomacy required because opposition will not be tolerated.

Imran Khan for Shaukat khanum GREAT!  Very influential, tons of contacts and a board of directors of those who’ll always be in agreement.  Again, opposition will not be tolerated.

But Imran Khan as a national leader; a recipe for disaster!

The thesaurus interprets diplomacy as ‘politics’ and politics as ‘government’. Imran khan sucks at diplomacy! So far he has declared that there cannot be an oath taking with Zardari as president and cannot be a political alliance with anyone obvious on the political horizon.

At the same time he flip flops between MQM the murderer and MQM the natural ally, eats his words about Sheikh Rashid,  thinks people will pay taxes because they are good at charity, and that Taliban are an anomaly which will disappear with the pull out of US and NATO forces.  All of this is not only wishful thinking, it suggest a clear lack of political understanding.

He is in denial of the non existence of an infrastructure, clueless about public behavior and obviously doesn't know the difference between a kingdom and a democracy.  Sadly, neither do his emotional followers.
For him to think that once in power (as he mentioned in his interviews) he will have the last word, is absolutely undemocratic (besides being pompously ridiculous).

PS. Did I just suggest a coalition? I think I did. Sometimes you have to use Penadol AND Imodium together, and also follow a restricted diet plan.
Posted by Saleha Minto at 5:37 PM