[Corporatizing May Day was written for The News Daily for its May Day issue but was refused publication. It first appeared on Socialist Pakistan News (SPN) on the 4th of May. It is being posted here with the permission of the authors, without edits and alterations]. 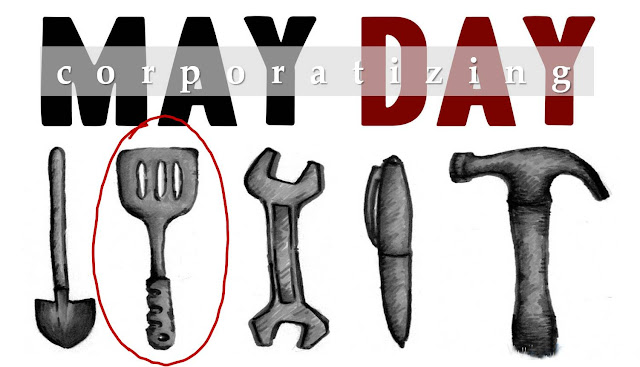 For more than a century, 1stMay has been celebrated universally, as International Workers' Day, or simply as May Day. It has been an event where trade unionists, progressives, radicals and Left political parties and movements have given a call to the workers of the world to unite, to rise up against exploitation at the workplace, against imperialism, in defence of the rights for the working classes, for equality for women, and for the disenfranchised.

Even after the collapse of socialism and in this neoliberal imperialist order, the symbolic relevance cannot be lost on an older generation of trade unionists, radicals, feminists and progressives. Many are now retired from political praxis, yet, presumably aware that May Day still has significant political and ideological connotations.

It is on May Day this year, perhaps disregarding its significance, that a number of Pakistani icons of the Left, of radical feminism, and of the trade union movement, have agreed to participate in an event organised and sponsored by the British Council entitled, 'Women of the World’ (WOW) at the Beach Luxury Hotel in Karachi.  WOW has been promoted as a festival which will be informed by the “keynote of British values of equality, diversity and inclusivity (EDI)” -- even such moral and ethical values now have an acronym. Co-organisers include, the Pakistan Institute of Labour Education and Research and the Research Collective. Some renowned Left and feminist-supportive enterprises such as, Standard Chartered Bank, Engro and L'Oreal, are sponsoring the event.

Some of the speakers are well-known socialist feminists who have historically chastised women’s rights NGOs regarding the sources of their funding. Other, younger, self-acclaimed anti-imperialist, feminist, speakers (who politic online against the running dogs of neo-liberalism and capitalism) have been forging their careers by protesting imperialism as the root cause of all evils – from FATA to Balochistan. Forget Women of the World, there seem to be no Pukhtoon or Baloch woman listed at this ‘diverse’ event. Presumably, these provinces have been decolonised while we weren’t looking.

The latest competitive trend against the NGO-isation of progressive politics in Pakistan is that of its culturalisation. The fatigue from donor-funded NGO seminars has allowed for a new invention by donor agencies, in partnership with the private sector. This is, the fashion of 'festivals for a cause'. The relentless marketing of culture as politics is not just a-typically postmodernist, it has meant that acclaimed pop literature and cultural festivals are being sold and consumed as worthy and alternative sites for political causes. Want to be an activist and entertained at the same time? Buy your tickets here…food, zumba and spin classes available between rape victim testimonies and something called, ‘speed-mentoring’. Corporatized fast food, start-a-business, just do it, sponsor and co-opt a revolution...

Increasingly, at events about women's rights in Pakistan, we have more men speaking to and on behalf of women. Clearly, we are so post-feminist that women don’t even need to represent themselves anymore. It is a wonder that Mukhtara Mai is being asked to give her testimony at Beach Luxury at all, when presumably, any male lawyer could have done so on her behalf.
We are also apparently, post-capitalist and May Day is not worthy of recalling the fact that labour classes in Pakistan have been under vicious attacks over just the past few months. The renewed uprising of Okara peasants, the Coolie protest against contractual exploitation and the targeted killing of polio workers are seemingly not opprobrious to ‘keynote British values’, one supposes. But are they not socialist nor feminist causes? What does it mean to have a session on conflict exceptionalising ‘Karachi as a Woman’?

There is a tendency to justify discomforting facts. We hear the usual mealy-mouthed excuses that it doesn’t matter what the venue of the event, nor how many men speaking, nor who is funding the initiative. The plea that young people come to such events is border-line orientalist when you consider that young people are everywhere - from PTI dharnas, to the beaches, to the market places, and upmarket chai dhabas. Just the presence of the young is insufficient to raise consciousness and concern about public issues. Using such platforms, always well-funded, has helped depoliticise the youth, made them consumers of fast moving goods, dependent on donors to organise their little get-togethers. While the British Council celebrates the women of the world on the 1st of May, the absence of positioning or mentioning May Day and its relevance - not just for the working men, but also for the struggling women workers of Pakistan -and to which so many former progressives have bought in, is a reflection of how progressive politics in Pakistan has changed.

These justifications of donor funded public causes, and perhaps even the revolution itself, wouldn’t be so absurd if the participating activists and organisations hadn’t made careers out of the alternative identity badges they wear and, if they didn’t despair with such arrogance over the fledgling left and compromised liberals and apolitical privileged elite. The slippage between the typed words of fury on Facebook, crude sloganeering over Twitter, and real-time activity is definitive of the progressive politics that they subscribe to. There is no longer any need to prioritise the workers of the world, or to participate collectively for the rights of the oppressed– an individual thesis, film or Tweet about injustice ought to do its job adequately.

Over the last few months, a group of progressive academics and scholars have initiated an attempt to start a dialogue amongst themselves as well as amongst a wider constituency. It includes Leftists, feminists and others concerned about progressive causes and politics. The focus is to revive the nature of debate in the public sphere and re-evaluate the trivialisation of key issues ranging from secularisation, militarisation, democratisation, NGOs and social change. At a time when several former comrades participate in corporate-sponsored events reducing the significance of May Day, a new generation of young activists is emerging, participating in political causes, showing solidarity with the Okara peasants, with women workers and by strengthening newly-rejuvenated Left political parties. They are finally questioning the depoliticisation of twenty years of the NGOisation of Pakistan and the finer rules of engagement with the state, the national question, politics of the domestic and how to revive the Left. All this political activity is just that: political, unfunded and unsponsored by donors or the corporate set, out-of-pocket contributions by the cadre themselves. This is a miniscule attempt in starting to talk about, and within, the Left and amongst progressives of varying shades.

The comrades at corporate events tend to defend their interventions as purposeful. But in fact, the history of NGOs is also littered with similar good intentions, which simply ended up diluting radical politics and making paid activism a virtue. It is worse to dance at both weddings and pretend there is no conflict of interest. The corporatisation of politics is simply a new dimension of depoliticisation and to pretend that it is a level playing field where awareness is being raised and politics being spread is to dupe oneself and in this case, an injustice to the cause of workers and women itself. 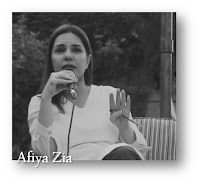 Afiya S. Zia is a feminist research-scholar and activist based in Karachi. She is the author of ‘Sex Crime in the Islamic Context’, 1994 (ASR, Lahore) and a very vocal critic of the partnership between Pakistani Secular Feminist Activists and International Development Organisations. Afiya has edited a series of books, authored several essays in recent publications and contributed to scholarly journals. Her research interests include the interplay of Islam and secularism in Muslim contexts, violence against women and the women health workers’ movement in Pakistan. 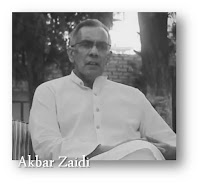