Can We Listen to Your Bleeping Music Please?

My son raps! He's pretty darn good (if I may say so myself). His subject matter and lyrics are quite substantial and he raps it out with significant ease. Last week he brought home his first amateure recording. We listened to it on the car stereo. Through rendition he kept his quick fingers on the skip button on his IPod and uttered the bleep sound every time he had to press it. The recording was two minutes long and he bleeped three times in all; not bad for a seventeen years old rapper writing his lyrics towards the end of 2013.

BUT, what do I know of Rap and Hip Hop? I entered this scene only through my kids. Before them I was limited to the classical lyricism of Indo-Pakistani singers and, to a minute extent, western duos and bands of the 70s & 80s like The BeeGees, ABBA, Simon and Garfunkel and The Carpenters. The common denominator here was not the kind of music but the choice of lyrics.

Traditional Indian and Pakistani singers do not sing songs; they sing poetry. To me Paul Simon's 'the sound of silence' is poetry; poetry sung beautifully well. So is 'Eventide' by Karen and Richard Carpenters (though not as beautifully sung).
But no parallels can be drawn when it comes to the frequency with which the Indo-Pak singers choosing from traditional poetry. If I were to put in a number I'd say that over 90% of Indian & Pakistani (not Bollywood) songs are, in fact, poetry. Penned by the master poets through the long history of Hindi and Urdu literature, these verses are, to say the least, 'serious stuff'. That is precisely why  serious listeners gauge qualitative merit of a singer by his/her selection of poetry. In other words the choice of poetry determines the 'artistic intellect' of a singer; and it doesn't end there. Think Spider Man... having found a great poetic piece brings with it the great responsibility of creating a strong and suitable musical composition for rendition. For most singers the first step is easy, thanks to the extremely rich and abundant poetic content of Indo-Pak literature. However, a substandard musical composition and/or a listless rendition doesn't just receive a bad review, it sends forth a message that the singer obviously lacks the intellectual finesse required to understand the depth of his/her poetic selection and therefore unworthy of any serious consideration.

With such a poetry focussed orientation in vocal music, who can blame me when X-Bitches leaves me shell shocked, speechless and surprised... perplexed, perturbed and puzzled... alongwith alarmed and appalled. Those of you who are not familiar with this 1998 Ice Cube number from the album 'War & Peace (vol 1)'.  For better understanding, below is a picture of the first 1:30 minutes of this track ... the full song runs five minutes: 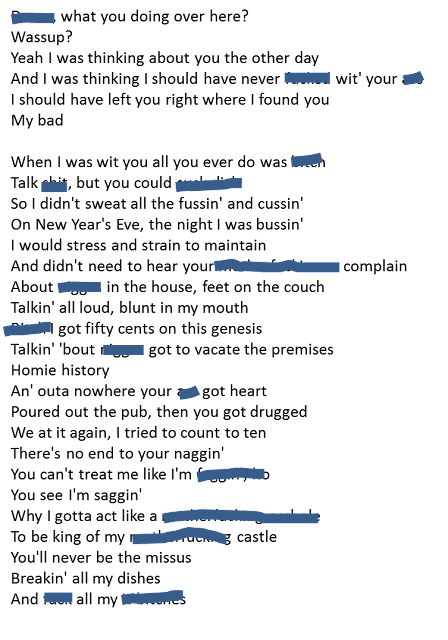 Please note the ninth line which is 39 seconds into the song... apparently the singer has a problem with 'cussin'!


Yes I do recognize how relativity contributes towards each and every aspect of human life, be it science arts or philosophy. Therefore the atypical lyrics, as in the example above, might very well be liked, appreciated and enjoyed by many who are not me. BUT, I also understand that it doesn't take very long for the 'atypical' to become the norm; especially in a society governed by political correctness. How this political correctness actually allows and nurtures political incorrectness in a debate for another time. Right now my dilemma is that my son raps very well but, owing to the usage of certain words which have become typical to rap, he remains uncomfortable about sharing his talent to the fullest with his parents and grandparents.

My parents and my parents in law are all in their eighties. They'll probably not be around long enough to witness profanity laden music become the norm. A less sentimental person might suggest that maybe its not for them and thats that, which could be (debatably) true; but that also means that they won't be enjoying their favorite grandson's talent, which, to me, is a shame. My son on the other hand is seventeen and hopefully has a lifetime ahead but does that give him enough time to become comfortable with something which has a certain negative connotation in his moral makeup? I'm afraid that a less sentimental person will have the same suggestion for him too... which, to me, is double shame!

Profanity in Vocal Music is a debate that can involve a lot of 'should've, would've, could've' but its not a debate that I intend to start here. All I intend doing through this little write up is to ask a simple question. The most beautiful thing ever said about music is that it has no boundaries. Going by that isn't it ok if one questions the authenticity of such music which has to be scanned, controlled, edited and blocked depending upon the social territory it is within?