I haven't been writing much. That's because I've been painting. Our small town has four small art galleries where local and touring artists take turns displaying their works all year round. I'm going to turn fifty in less than two months and the desire to have my first exhibition before that is strong these days.
BUT, there are things transpiring every moment of every day and some of them I just cannot let pass without comment.

1st Thing:
Yesterday marked twelve years since two aircrafts were flown into the WTC buildings in Manhattan, New York. I watched it on TV while cooking breakfast for my kids. I was only three years new in the US, had recently moved to the then famous and fabled Silicon Valley & had no clue that what I was watching was not special effects. Not until my brother called from  Bangkok asking the same question, "is it for real"?  I hope everyone understands that the doubt in our heads was for no other reason but the sheer unexpected  bizarreness of the tragedy. However, through the twelve years since then, an actual group of people has emerged who not only doubt the 'bizarreness' but also the motive and the roleplayers. This group dismisses the US version of the act of terror (they do not believe it was an act of terror at all) and present a theory which can be bullet pointed as follows:

I cannot give you the details, reasons or purpose of either the theory or the theorists behind it simply because I have never tried finding out. But I can tell you this that some of my 'friends' on Facebook are whole hearted supporters. These are the same people who question the authenticity of Holocaust but conveniently keep a blind faith when it comes to their God, prophet and religion. One of such 'friends', who is pretty irked by President Obama's recent declaration of 'move to strike Syria' posted this: 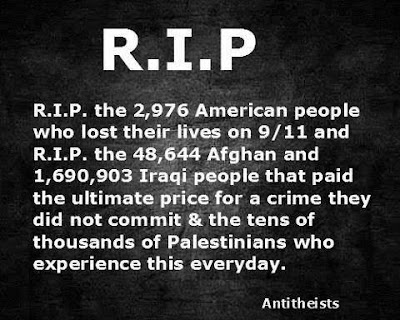 I do not go looking for public opinion declarations on the net but since this showed up in my notifications, I commented as follows:

.....disagree that Afghans, Iraqis & Pakistanis are not 'accessory' to the crimes committed in the name of Islam. Even by Islamic law, withholding knowledge about a wrongdoing, being complacent in a criminally/militantly driven society and keeping quiet while watching the aggressor act is being a partner in crime. ..... the past few years have seen me speak out loud about the atrocities committed by MUSLIMS to prove that only them and none else is in the right. AND those who'd want to retort with the hackneyed cliche "(these people) are not Muslims" & that "Islam is a religion of peace", 2 things:

I dare ... all to read the book (and) the history to find out what u have been pledging your allegiance to and then decide if u have what it takes to follow religion/s OR show the (dignity) to choose human rights over religion. 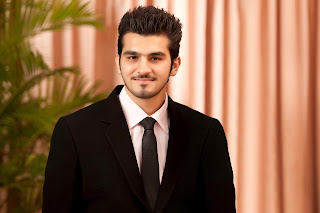 Which brings me to the 2nd Thing on my list. On Christmas eve last year, Shahzeb Khan, a twenty years old young man from Karachi, was gunned down by one Shahrukh Jatoi on the behest of his friend Siraj Talpur. The killing was the result of an argument over the servants of the killers making suggestive passes at the victim's sister, to which he objected angrily. What made this murder a 'contemplated cold blood killing' was the fact that the verbal 'fight' was broken up & resolved but a few hours later the killers returned with a 9mm gun and shot the unsuspecting Shahzeb four times while he sat in his parked car outside a mosque in a popular upscale market area.
What followed was a series of events in which the killers (belonging to powerful and wealthy feudal families of Sind) escaped to Dubai defying all law enforcing and security agencies, the victim's friends and family effectively used the social media to get attention, the Chief Justice of Pakistan 'took notice' and the authorities were directed to register a case against the suspects and produce them for first hearing. In less than a month four accused were arrested (including Shahrukh Jatoi in dubai), remanded and the trial was on its way. By June 6, 2013 the court wrapped up its proceedings by awarding two death sentences and two life imprisonments to the four accused.
Three months later, on 9/9/2013, Pakistani media went berserk airing the news that all four convicted were "pardoned by the victim's family in the name of Allah".
Since the Pakistani Law on murder conforms to Islamic 'Sharia' it does talk of 'blood money' in exchange for 'death' however, I have not come across 'absolute pardon' being a part of this law. Neither have I been able to find such a precedent (in a murder case after sentencing) in the history of the Pakistani court system so my comment on this is: "Go figure"!
Interestingly though, this 'pardon by the family' did not sit well particularly with those involved in turning this case into a 'cause for justice' in Pakistan. This includes journalists, witnesses and Shahzeb's friends. For a common man taking on the feudals in a criminal case takes courage with a capital C. It is therefore, not surprising if these people feel terribly disappointed, let down and cheated.
But why is the general public pissed? Is it that average Pakistanis have come to a point where their craving for justice has overcome their need for religion? I don't know if they are ready to point out how the "Islamic Law" leads to lawlessness but, for once, many more than a few have openly criticized the massive loophole therein.

And talking of loopholes, it looks like religion in Pakistan is actually the loophole helping everyone and everything slide out of sticky situations.
The 3rd Thing is one such sticky situation about which I must comment before it fizzles out of our forgiving minds.

This is Amir Liaquat Hussain, 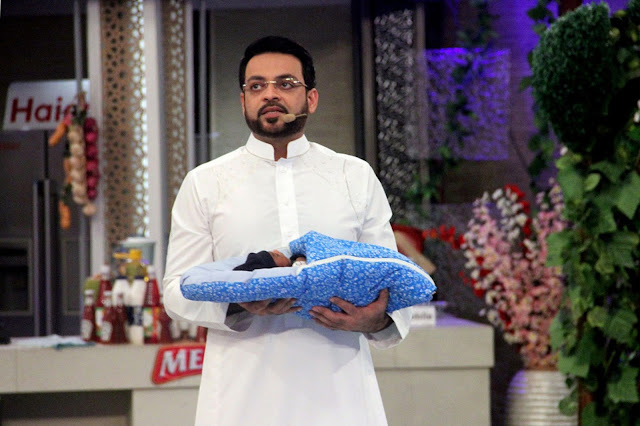 a televangelist turned game show host holding an abandoned baby which he will award to the couple who answer correctly his questions on religion. According to the information available, more than two babies have been given away as 'prizes' and there are more in line awaiting their turn.

I have already shared with you my comments on the first two things. My comment on this last one is: "I would like to believe that Amir Liaquat Hussain, his game show and the 'prize abandoned babies' do not exist". I would like to believe this just like the facebook friend I mentioned and others who believe that holocaust didn't happen, 9/11 was staged by the US government & blind faith in a religion is the key to salvation.
PS. If ever I was interested in seeing public comment on articles on this blog, its now.
Posted by Saleha Minto at 2:50 PM